John Warburton-Lee describes Gilar, his 500-acre farm in North West Wales, as “having every agricultural god stacked against us. In winter it blows holy hell up here!”

The rugged ground is north-facing and ranges from 900ft to 1,700ft, but in spite of the harsh conditions, he is determined to show that it is possible to reverse the decline of songbirds on the farm. Working with GWCT Wales and Kings Seeds, John Warburton Lee and his farming partner Trystan Edwards have committed to a three-year demonstration project funded by the European Innovation Partnership to establish wild bird crop mixes and put out food in the hungry gap. He said: “Additional feeding with the buckets is easy, but the cover crops will be more of a challenge. Like many livestock farms, we are no longer equipped to sow seeds, so will have to pay a contractor.”

So what would John like to see in the new generation of agri-environment schemes post-Brexit? He is convinced that if the government wants to hit its biodiversity targets, it must engage, inspire and incentivise the farming community. “I think there’s a huge need for a change of approach. Farming is tough and many farms operate at little better than subsistence level. Welsh farmers care passionately about their land and the farming way of life. They don’t go out to deliberately denude the landscape and should be valued as partners. New schemes need to be easy to implement and farmers need access to expert guidance. GWCT Wales is one of the few organisations that can provide that and is hugely welcomed.”

The pilot on Gilar, a hill farm in North West Wales, has shown real potential already. This year’s counts show that, in the first year, just one tonne of supplementary feed and six acres of cover crops have resulted in six times the number of farmland birds.

John said: “I think it would be great if simple schemes like this enabled farmers to deliver environmental benefit alongside meat production. We have the evidence that it works and will continue to monitor it. I’m hopeful we can demonstrate to both Government and farmers that it’s an incredibly simple and highly effective thing to do. If we had big enough take up, I believe it could go a long way to reversing biodiversity decline in Wales.” 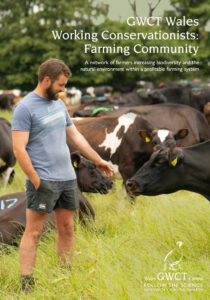